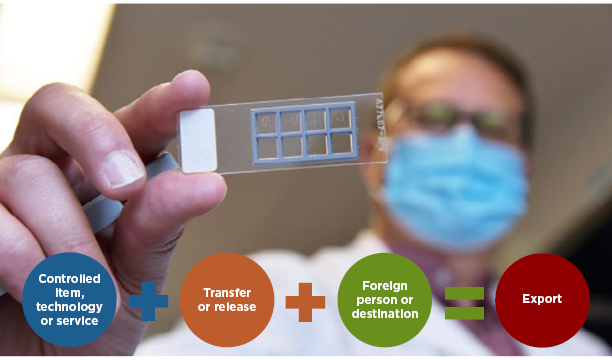 What is an export?

An export is the transfer or release of a controlled item, technology or service to a foreign person or destination.

The U.S. government has implemented regulations controlling exports to allow as much international engagement as possible while restricting the export of key things, interactions with key people and engagement with countries for the purposes of:

Because of this, export controls are a complicated network of regulations that identify which exports require specific permission from the federal government in the form of an export license and which do not require explicit governmental approval.

Activities that may be restricted:

An additional "catch-all" category in the regulations, EAR 99, covers any goods or technology defined in 15 CFR §734.3(a), but not on the CCL.

The U.S. Department of State administers ITAR (22 CFR §§120-130). ITAR controls the export of defense articles, services and related technical data – items the Department of State has determined to be inherently military in nature (e.g., items designed to kill or defend against death in a military context).

The U.S. Munitions List (USML) includes ITAR-controlled items (22 CFR §121). Unless a specific exclusion or exemption applies, licenses are required for the export of an USML-listed item in these categories:

Note that all satellites and related technologies are controlled by ITAR as a result of the 1999 congressional expansion of ITAR jurisdiction.

This program, which is based on U.S. foreign policy and national security goals, administers and enforces economic and trade sanctions against targeted foreign countries, terrorists, international narcotics traffickers and those engaged in activities related to the proliferation of weapons of mass destruction. The scope of the boycott program depends on the country involved and is subject to change. See complete sanctions list on OFAC’s website.

To avoid major fines (potentially up to $1 million), an exemption or exception to the requirement for a license must be available (please be more specific…what should be on file and where?)

A variety of exemptions/exceptions are possible, but the one most often used in academic settings is the fundamental research exclusion.

Fundamental research is characterized as basic or applied research in science and/or engineering at a U.S. accredited institution of higher learning that produces information published and shared broadly within the scientific community.

University research does not qualify for this exclusion if:

Export control regulations do not apply to information released in academic, catalog-listed courses or in teaching labs associated with those courses. In their courses, faculty members may discuss what might otherwise be export-controlled technology without an export control license, even if foreign national students are enrolled in the course. This exclusion is based on the recognition in ITAR that general scientific, mathematical or engineering principles commonly taught in schools and universities and information in the public domain should not be subject to export control restrictions.

Information published and generally available to the public, as well as publicly available technology and software, is outside the scope of export control regulations. This exclusion does not apply to:

Note: Most graduate students are not regular, full-time university employees and disclosures to them will not qualify for this exemption.