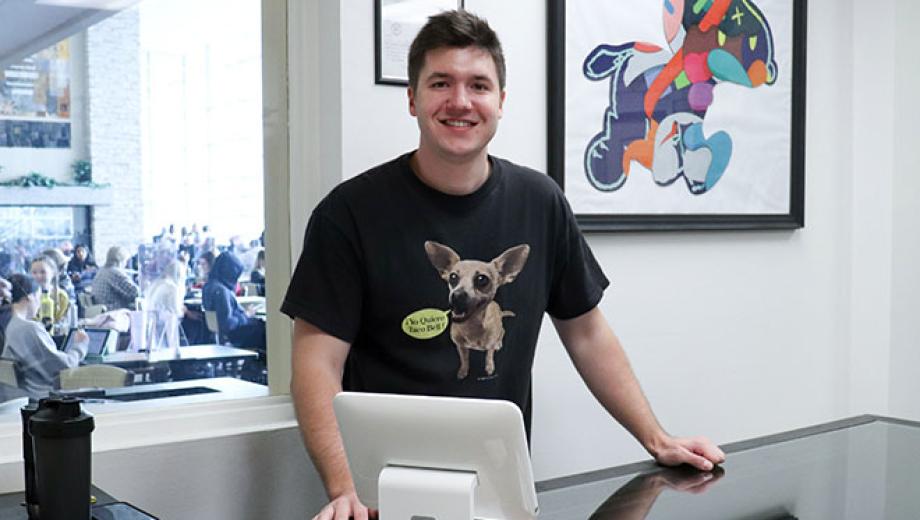 Story by: Mavis Chan
Photos and video by: Allyson Imhoff

On a cool October morning, MU junior Grant Houston was busy tagging newly arrived jackets at Hype & Stripes, his store in the Griggs Innovators Nexus at the MU Student Center.

Hype & Stripes is not a typical clothing store. Instead, Houston offers his customers vintage finds, selling everything from 2012 Adidas sneakers to Mizzou T-shirts from the Y2K era.

Each of Houston’s items is unique with a special story behind it. For example, he once sold a shirt displaying unrecognizable cartoonish puppets. After a little research, he discovered that the characters were from the obscure “Tightline and Sinker Show,” whose puppets enjoyed fishing (and only one season on cable TV in the 1990s). Stories like this have helped Houston sell his products.

Hype & Stripes is a student-run business in the Griggs Innovators Nexus, a place where students collaborate, receive mentoring and learn firsthand what it takes to start and run a company. The Nexus partners with the Missouri Student Unions and U.S. Bank to offer three 300-square-foot spaces for student ventures. During the spring semester, students apply for the spaces, which are awarded through a competitive process for the next academic year.

“Students like Grant who receive a retail store front for the year also are provided with a $2,000 scholarship from U.S. Bank,” said Greg Bier, executive director of entrepreneurship programs. “U.S. Bank’s sponsorship of the program allows the students to build out the storefront and buy initial inventory.”

A Kansas City native, Houston has been reselling sneakers for about eight years. His passion for shoes came in seventh grade when he went to a Ross Dress for Less store and recognized a pair of sought-after shoes.

“I ended up buying them and made about $100,” Houston said. From then on, he started buying shoes from discount stores and selling them online. Four years later, Houston added clothing to his inventory after noticing the popularity of vintage fashion among YouTube influencers.

Since the beginning of his entrepreneurial career, Houston has been selling his goods online. The idea for a physical retail store came to him when he was touring the university as a high school student and learned of Mizzou’s many entrepreneurial opportunities. Soon after he arrived, Houston met with Bier, who he describes as “an awesome resource.”

“He really just gave me this plan and the steps that I needed to be able to pitch for my business and to be able to have a successful business,” Houston said.

Nexus staff provided Houston with a step-by-step guide on starting a business, which included crucial information, such as how to file articles of incorporation and obtain a business license. And they connected him with bankers, lawyers and other entrepreneurs. In addition, Houston has gleaned valuable information from focus groups, biweekly meetings and university databases and journals.

Running Hype & Stripes has taught Houston how to manage employees, comply with complicated regulations and promote his business using social media. Daily posts that feature customers and offer sneak peaks of new inventory have been very effective. In fact, members of the Mizzou football team had been purchasing from Hype & Stripes lately, including head Coach Eliah Drinkwitz.

“Grant knows who his customer is,” Bier said. “He knows what time of the day to post and what day of the week to post for maximum visibility.”

Houston believes vintage clothing is a better option than fast fashion because the latter produces a huge amount of waste. Vintage clothes are sourced ethically and are more environmentally friendly. Houston’s goal is to get students to switch to buying vintage clothing.

“I want people to express themselves with clothing, but to do it in a more sustainable way,” Houston said.