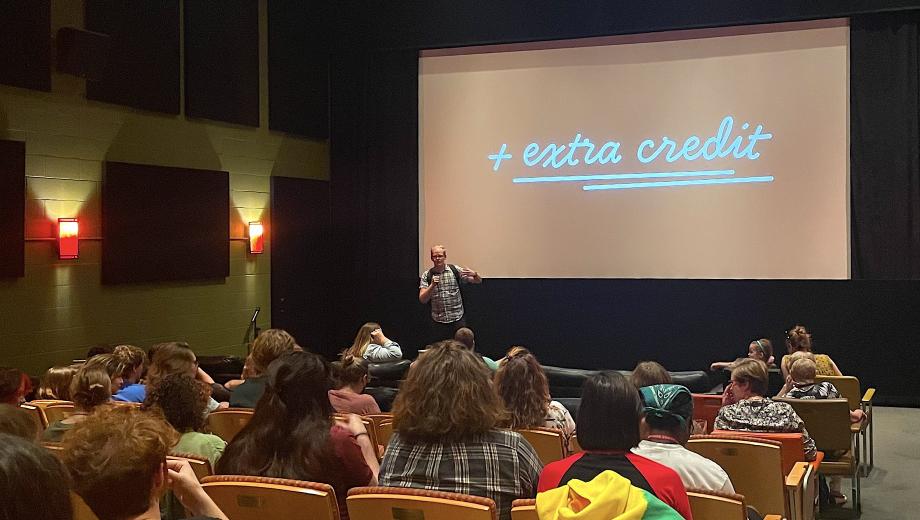 The Extra Credit film series, presented by the Division of Research, Innovation & Impact’s The Connector and hosted by Ragtag Cinema, explores popular films through an academic lens.

Sure, the film is filled with uproarious laughs as it rockets forward with a high-octane soundtrack from rock gods such as Led Zeppelin and AC/DC. And star Jack Black thrashes about the film like an even more hyperkinetic version of AC/DC’s already energetic guitarist Angus Young.

But the Richard Linklater film with a heart-of-gold redemption story also deserves scholarly consideration as it warns against the “Man,” praises face-melting music and encourages viewers to follow their rock dreams.

That’s why on a recent Monday evening in August, cinephiles gathered at Ragtag Cinema in downtown Columbia to watch the comedy and then hear three University of Missouri scholars offer their thoughts on a film whose tagline proudly shouts, “We don’t need no education.”

The screening was part of the Extra Credit film series presented by the Division of Research, Innovation & Impact’s The Connector, a partnership between the division and MU Extension that connects MU research, resources and ideas to benefit the people of Missouri and beyond.

“Extra Credit is a fun way for MU researchers to engage with the public without much of the pressure traditional engagement or outreach events require,” said Sara Vassmer, director of The Connector. “Extra Credit adds dimension and context to movies that have become ingrained in our culture. Research, at times, can seem removed from our day-to-day lives. Events and series like Extra Credit make this work accessible and relatable to our community members through a shared experience, a movie.”

Started in September 2018, the series, which “re-examines pop-culture cinema through an academic lens,” has presented films from “Black Panther” to “Inside Out” to “Groundhog Day.” The series, supported by funds from the division and MU Extension, returned with a new slate of films to examine in July with “Ferris Bueller’s Day Off” and offers “Desperately Seeking Susan” on Monday, Sept. 12.

Following each screening, a panel of MU researchers and scholars offer their academic insights into the film and field questions from the audience.

“Extra Credit was born out of an idea Susan Renoe (MU’s associate vice chancellor for research, extension and engagement) had for a stand-alone event in collaboration with Ragtag,” Vassmer said. “The event was a success, and they decided to keep going.

“We work with Ragtag to select a year’s worth of pop culture movies. We put our heads together to determine themes and possible angles for our panel discussions, and The Connector identifies researchers whose research complements those themes.”

The trio didn’t discuss Rock History or Rock Appreciation in Theory (both fictional courses from the film) but praised how “School of Rock” celebrates the arts and offered their thoughts on the breezy comedy.

After the panel conversation, Murph said she had to remind herself that the “Jack Black-silly” film is almost 20 years old and intended for teens and adults. Still, beyond a few name drops and Stevie Nicks’ “Edge of Seventeen,” the movie’s musical gods are mostly white and male, she said.

While the family-friendly “School of Rock” is light-hearted, the comedy also shows the importance — or sometimes lack thereof — placed on the arts within the core curriculum for students, Chosy said.

“I am a firm believer that access to arts education is essential for human development, and this film shows just how impactful this can be for students,” she said.

But the film and Extra Credit also show the possibilities of connecting academia with popular culture are truly endless, “as popular music reflects the interests and values of our society,” Chosy said.

Pairing a boisterous film such as “School of Rock” — or even more serious fare such as previous showings of “Gravity” and “Eternal Sunshine of the Spotless Mind” — with an academic discussion also demonstrates how much fun learning can be.

Plus, Extra Credit reinforces the connection between Columbia and Mizzou.

“Ragtag is located between downtown and campus, so this series is a way for folks from inside and outside of academia to watch a ‘cult classic’ together and chat about what they noticed,” Murph said. “I love how the conversations include different perspectives and interpretations, which is such a great contribution to Columbia as a whole.

“It is a fun way to learn. It doesn't feel like you're sitting in a lecture hall or pouring over textbooks, rather you're experiencing history on screen and then thinking about or discussing it with others who are interested in similar topics. While the ‘experts’ attend and are panelists at the Extra Credit events, I felt like everyone was on the same page and treated intellectually equally. We all have experiences or thoughts that are worthy of sharing to learn and grow together.”