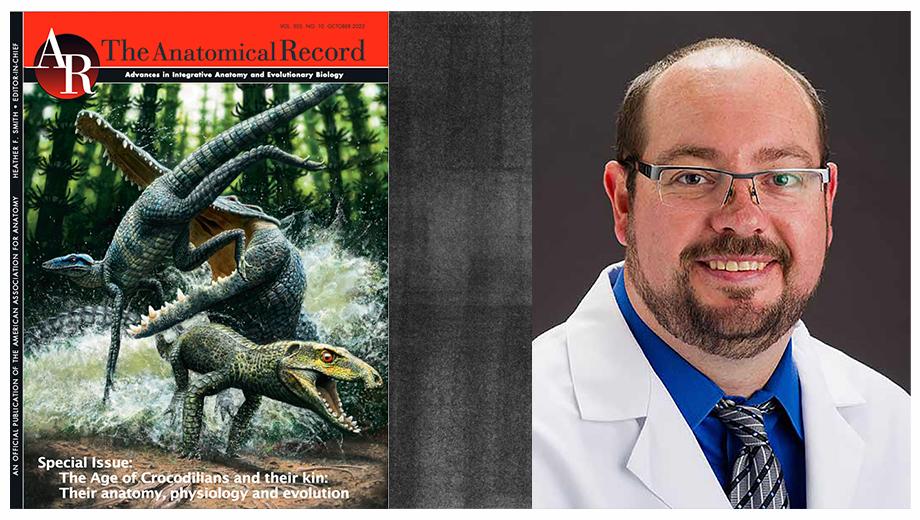 Crocodilia, the ancient order of reptiles, are often described as “living fossils.” But the label is a poor descriptor for the remarkable animals that first surfaced around 95 million years ago.

“Research shows how these animals have changed remarkably since the Cretaceous extinction 65 million years ago, and how they continue to evolve via adaptations we’re only recently aware of,” said Casey Holliday, an associate professor of pathology and anatomical sciences at the University of Missouri. “Alligators came from a group of short-faced, smaller-bodied, snail- or turtle-crunching species found in Montana and more northern latitudes. Only over the past 30 million years did they get the longer faces and particularly larger body sizes they have today. So, if gators are living fossils, I suppose horses and baboons are, too.”

The extraordinary journey of crocodiles and their many cousins, including alligators, caimans and more, is covered extensively in a new special issue of The Anatomical Record, The Age of Crocodilians and their kin: Their anatomy, physiology and evolution, for which Holliday served as guest editor.

The October 2022 issue of the journal, an official publication of the American Association for Anatomy, explores the anatomy, physiology and evolution of crocodylomorphs, which includes both crocodilians and their extinct relatives.

Holliday’s duties as a guest editor included creating a list of contributors (the editors ultimately had about 40 papers submitted), handling submission peer reviews, co-writing an issue introduction, and consulting on the issue’s cover art and guiding the creation of the issue with people from the journal.

He also served as author or co-author on five journal articles, covering research from his lab such as alligator cranial nerves, feeding biomechanics and evolution in crocodiles, and jaw muscle imaging and mechanics.

Five students, including high school, undergraduate and PhD students, helped contribute to the papers from the Holliday lab in the issue with most of the work happening between 2018-2021.

“Our papers used a mix of imaging approaches, biomechanics and comparative/quantitative biology,” Holliday said. “One paper on how the cranial nerves develop in alligators is really cool research from Emily Lessner, who just graduated with her PhD. We’ve never been able to see or measure nerves all that easily and new approaches we’ve developed fix that. This paper shows, in particular, how the trigeminal nerve gets really big, really fast in alligators. This nerve conveys a sense of touch to our faces. Alligators don’t have whiskers like mammals, but instead have ‘invisible whiskers’ that can sense vibrations in the water. We can now show how the nerves that supply this grow. These findings are then used to sort out how big the nerves might be in other reptiles so we can infer how sensitive their faces might have been.”

Another paper shows the research of Kaleb Sellers, also a recent PhD grad, who investigated how crocodiles went from having tall, thin skulls to squat, flat skulls and what that did to how the jaw muscles work. The work involved building 3D models of fossilized and living crocodiles to show how this biomechanical paradox happens and how living crocodiles rescued themselves from this problem.

Learn more about crocodiles, the special issue, the work of Holliday’s lab and how he gets students involved in his research in this Q&A.

As the issue’s editorial says, whales, monkeys, big cats, etc., might seem like more approachable animals for a young researcher, so why do you study crocodiles and their ancestors?

I grew up around alligators on the Space Coast of Florida and was a University of Florida zoology graduate in 1997, so I was always quite familiar with them. But I really got into them in graduate school because they’re a window into how dinosaurs worked. Dinosaurs, or paleontology broadly, is considered one of the great gateways to science along with astronomy and anthropology. If one wants to study dinosaurs more rigorously though, they need to learn about the living relatives of dinosaurs: particularly crocodiles and birds.

In terms of being approachable, cats, whales and human ancestors are more closely related to us, so there’s always part of us that identifies better with our other furry friends (even whales still have some fur) than the more foreign, scaly animals. Some of us, I suppose, prefer more scaly friends.

What is it that humans can learn from crocodiles and their evolution?

Alligators (and other croc species) are used in the hide and leather industry, and gators were almost hunted to extinction in the ‘70s. They don’t taste all that great, so they’re only secondarily used for food. Today, they’re a success story for conservation biology where there is a strong, positive relationship between conservation and industry interests, and this relationship also has served researchers well because we have easy access to specimens.

Alligators, in particular, are the more “cold-adapted” crocs on the planet and are found in relatively high latitudes compared to the more sub-tropical/equatorial distribution of other living crocs. So, alligators are signs of climate change here in North America and will migrate northwards along with the frostline. Their ancestors used to live as far north as Alaska and Ellesmere Island back about 50 million years ago during our last bout of high global temperatures. As temperatures warm up here, we will start to see alligators in more middle-northerly watersheds of the Mississippi River. While they’re known to be in some rivers in southern Arkansas and Tennessee now, we can likely expect them in our waterways here in Missouri in the coming decades. What this means for conservation biology in the near future and the next 100 million years of croc evolution remains to be seen!

The issue’s introduction states “a remarkable breadth of discoveries on the biology and evolution of crocodilians and their ancestors” have recently been published. What are some of these discoveries discussed within the issue?

Inside the pages of this volume are comprehensive descriptions of new fossils like a cool 200-million-year-old croc ancestor from the Petrified Forest National Park in Arizona called Revueltosaurus; another cool fossil croc from the Jurassic Period in China, known as Junggarrsuchus; and another on the community of crocs that co-evolved with our human ancestors in the rift lakes of East Africa, among others. Several papers show how different parts of the head and body have evolved, culminating in the modern form, or how these structures developed while in the egg, such as nerves, muscles and necks. We have papers describing the ventilation of noses in gharials, ears in alligators, lungs in caimans, how the diaphragm works in alligators (work done just up the road in Kirksville) and even how genital organs are built. Several papers use new imaging techniques to show the 3D anatomy of cranial nerves, noses, jaw muscles and lungs.

What is the research focus of the Holliday lab?

We study how animals are built, how they work and how they change over time. In particular, we study the craniofacial biology of reptiles and mammals including how their muscles, bones and joints work; how their nerves and brains work; and other parts along the way. So, it’s a mix of anatomy, zoology, paleontology, biomechanics and computational biology. I have particular expertise in imaging and biomechanics of heads, and we usually have work going on sorting out how the skulls of dinosaurs, birds, crocs and lizards work, and how they’ve evolved. We have papers in the works on how bird skulls evolved from dinosaurs, how pangolin tongues work, and how gecko and snake muscles work. We also were just funded to work on how mammal ears and jaws work together during development and evolution.

A recent Show Me Mizzou article discussed the use of artificial intelligence (AI) in your lab: How does that make your research easier?

We use AI quite a bit in processing imaging data into 3D models of soft tissues. We use a contrast-enhanced Micro-CT scan, which gives us high-resolution, small-scale images of soft tissues like muscles and nerves. A regular CT scan, like at the hospital, largely just shows your bones at relatively low magnification. We then use lots of manual work (hand coloring slices) to build 3D models, but also machine learning approaches to trace out patterns of muscle fibers or nerves in 3D. It would take years to trace some things out by hand and these algorithmic approaches let us train software to do some of this work much faster than we could. We’ve been described as using this software “creatively” by the company (Thermo Fisher Scientific), so this means we’re at the forefront of figuring out how to make these approaches, such as 3D muscle architectural modeling, work.

On your School of Medicine faculty page, you talk about being “heavily engaged in training the next generation of scientists.” What are some ways you train these scientists?

My lab is open to all sorts of people interested in comparative anatomy and the fossil record. So, I start by making opportunities available for these folks, such as kids interested in dinosaurs, students interested in imaging or herpetology or vet or med school, and even teachers and adults interested in how to better communicate science to their students. We have lots of hands-on work going on. Whether people want to dissect animals, use imaging and modeling to make virtual reality animals, or study the fossilized remains of some ancient species, we tend to have a lot to offer curious and creative people. Our people learn classical anatomy techniques like dissection and histology as well as new techniques like imaging and 3D modeling. We write papers, get grants, teach classes and give talks — all currencies we use in the sciences. Being a good scientist also usually means being a good communicator, so I expose my people to community outreach and engagement activities where they can learn to talk to other people about the science they do in the lab.

Why is training new scientists important to you?

I have always been a teacher at heart, and I find passion in sharing discoveries or scientific processes and stories with people. I also see science training and communication to be an important service we provide for the public and laud our campus for carrying on the land-grant tradition of extension and engagement. Everyone should have a little bit of a scientist in them and be able to think critically about their environments big or grand. I think it’s our job as faculty here to help improve the scientific literacy of people near and far. I also have found myself, however, at this forefront of comparative biology, imaging and mechanics, straddling paleontology and neonatology, having actually found or made “new things.” Now I also see it as my job to also train up the next generation of people interested in also pursuing research in comparative anatomy, paleontology, mechanics, craniofacial biology — you name it — so that they can help solve problems of the future.